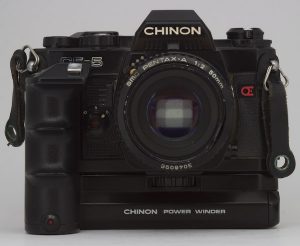 The Chinon CE-5 was a 35mm SLR camera produced by Chinon, that was one of the first cameras to have autofocus-capable lenses produced for it.[citation needed]

The camera had a Pentax K mount (addressed to in the specifications as the Chinon „universal mount”) with which its lenses were mounted. 3 autofocus pins were present upon the top-left of the mount, which the autofocus lenses interfaced with. These autofocus lenses were rather heavy and depended upon their own large, lens-mounted motors.

The camera had two modes: aperture-priority and full manual. The shutter speeds ranged from 4 to 1/2000 seconds (steplessly) in aperture priority mode and 2 to 1/2000 seconds in manual mode, in addition to a „bulb” mode. The shutter was controlled electronically in both modes; and was a Seiko electromagnetic metal focal plane shutter. A multiple exposure switch was also incorporated into the camera, alongside a 5 or 10 second self-timer.

The CE-5 was shipped with a full ground glass screen along with a split image range finder and a microprism collar to aid focusing. Other screens were made available.

An „X sync” flash hotshoe was incorporated, with contacts especially for the Chinon range of dedicated flashes.